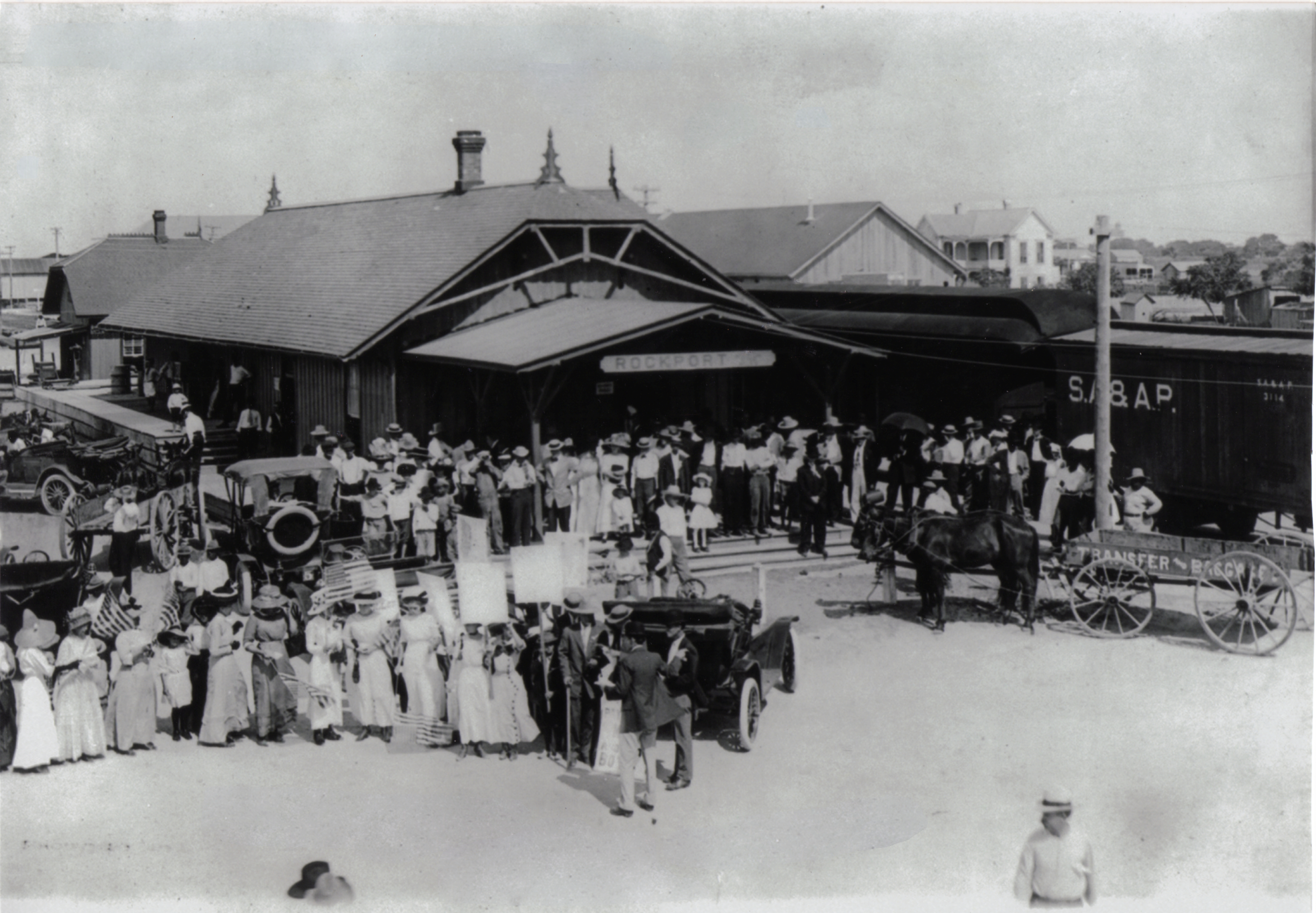 In July 1888, the first San Antonio and Aransas Pass railroad train arrived in Rockport. Four trains came every day from San Antonio. This shows the depot in about 1917. 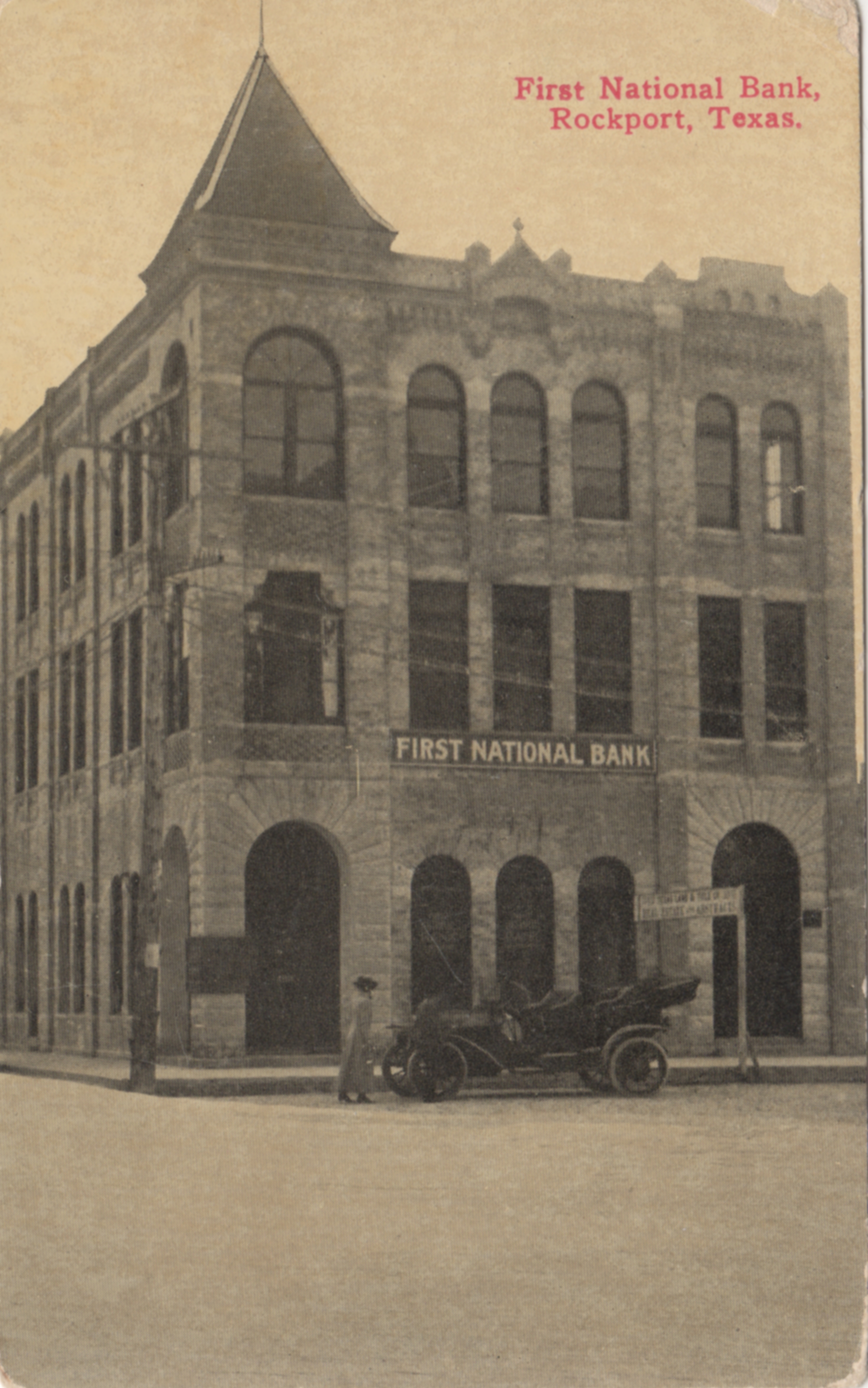 The First National Bank of Aransas Pass was chartered on October 8, 1890. Rockport had changed its name to Aransas Pass in an attempt to get a deep water channel through the Aransas Pass. The name changed back to Rockport in 1903. 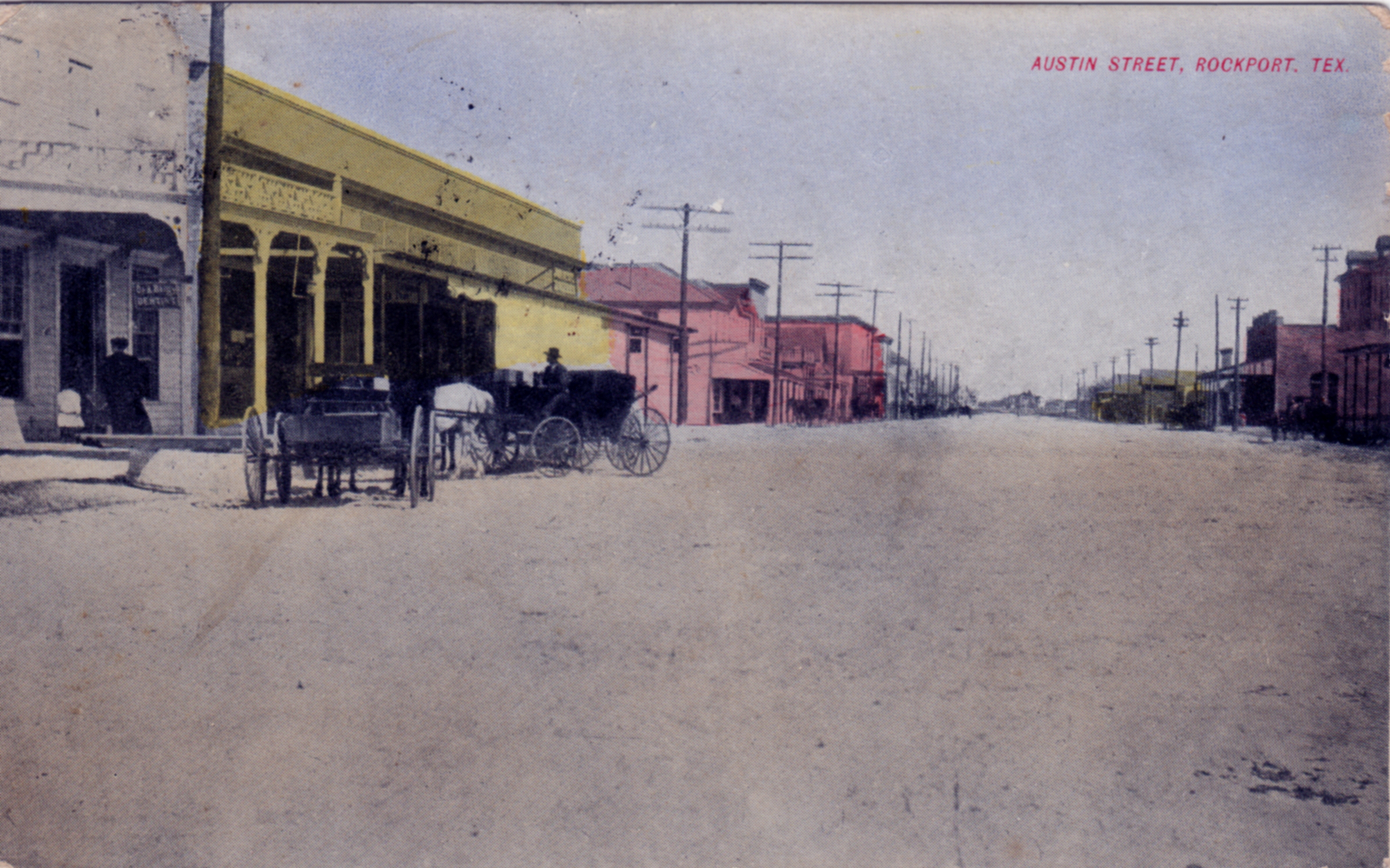 This is a picture of Austin Street in downtown Rockport in 1909. The streets were made of crushed oyster shells. 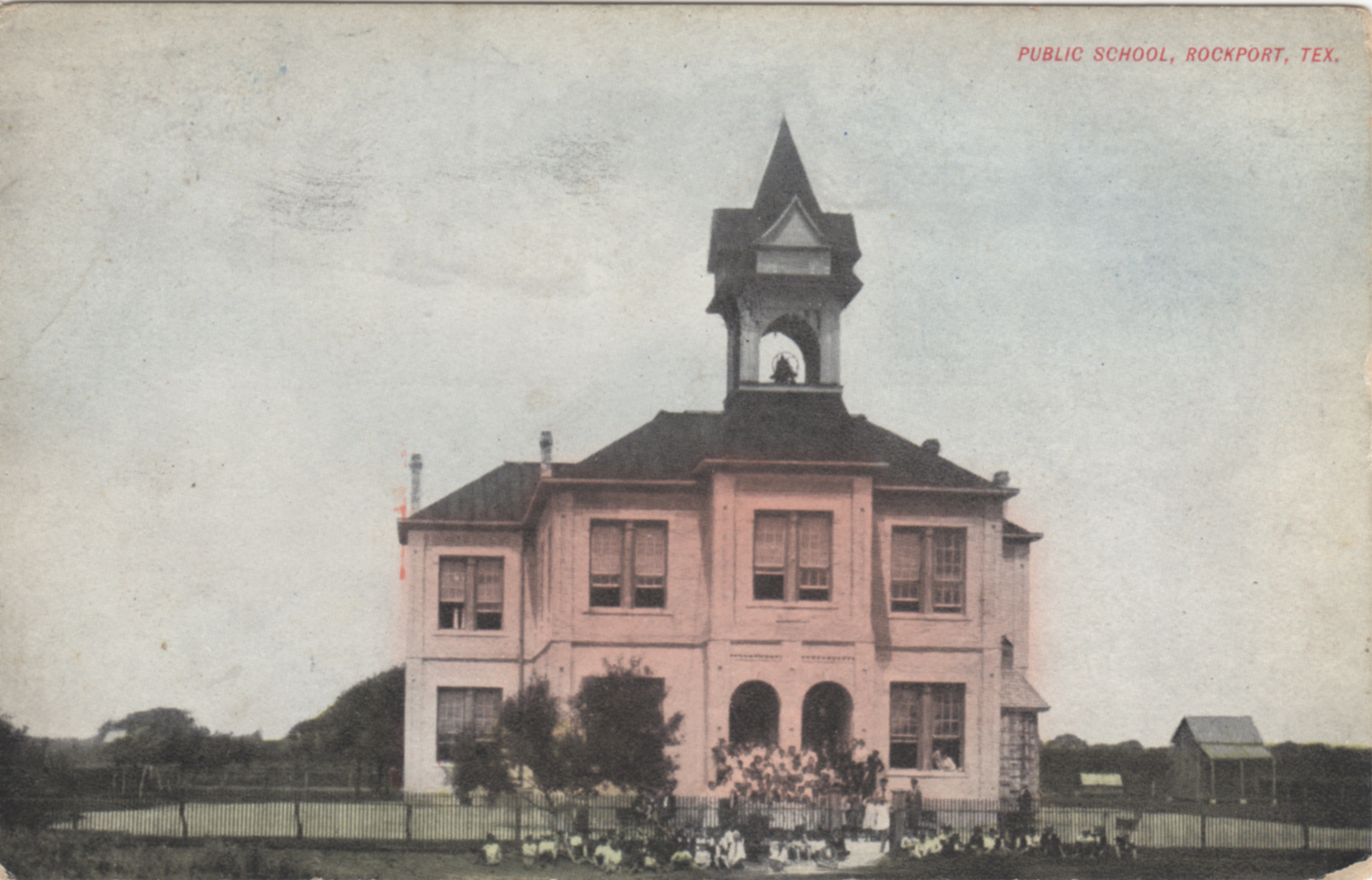 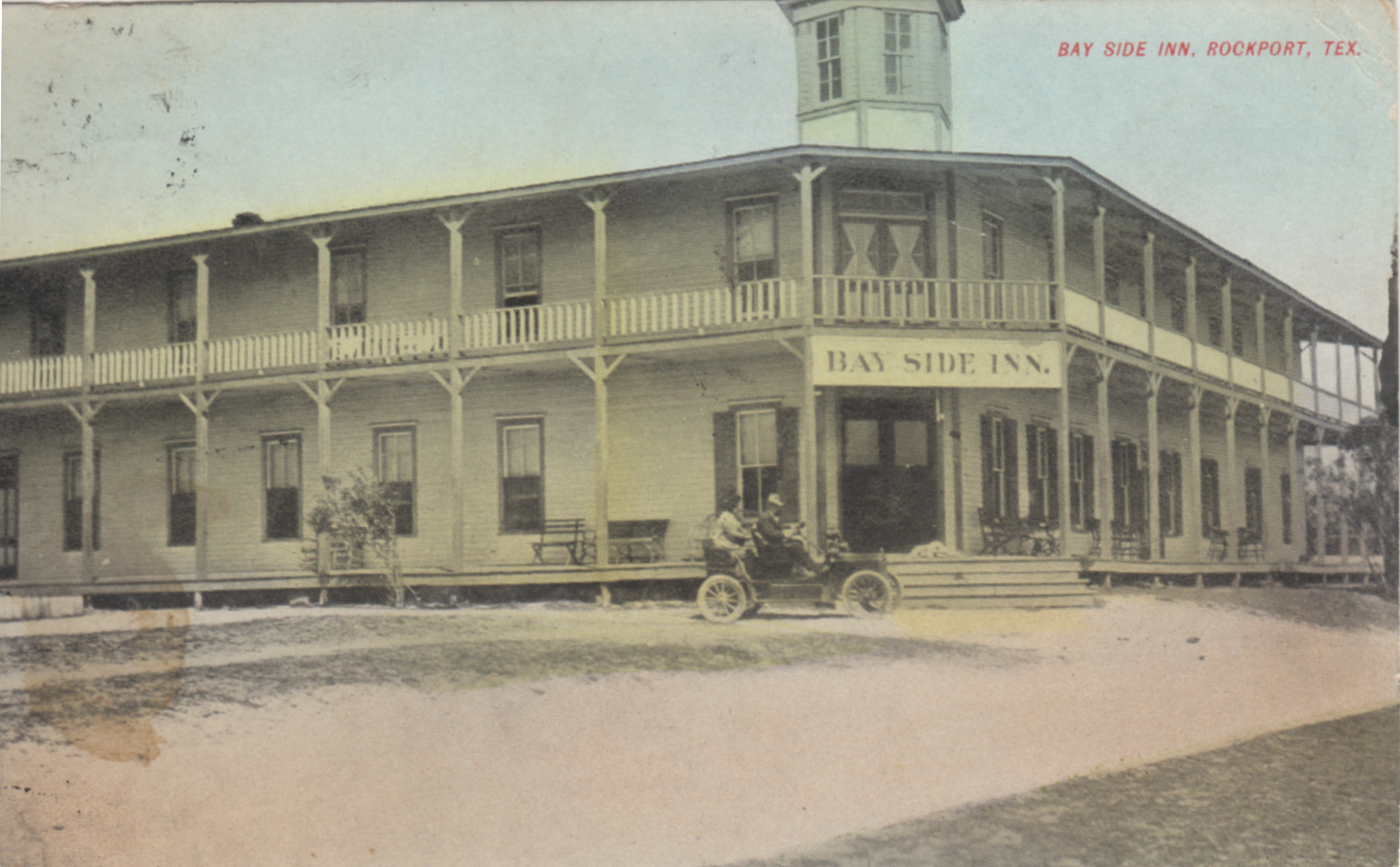 With the coming of the S.A.A.P. railroad, hotels sprang up in Rockport. The Bayside Inn was on Water Street. It had a long pier with a small pavilion at the end that jutted out into Aransas Bay. The Inn was destroyed in the 1919 hurricane. 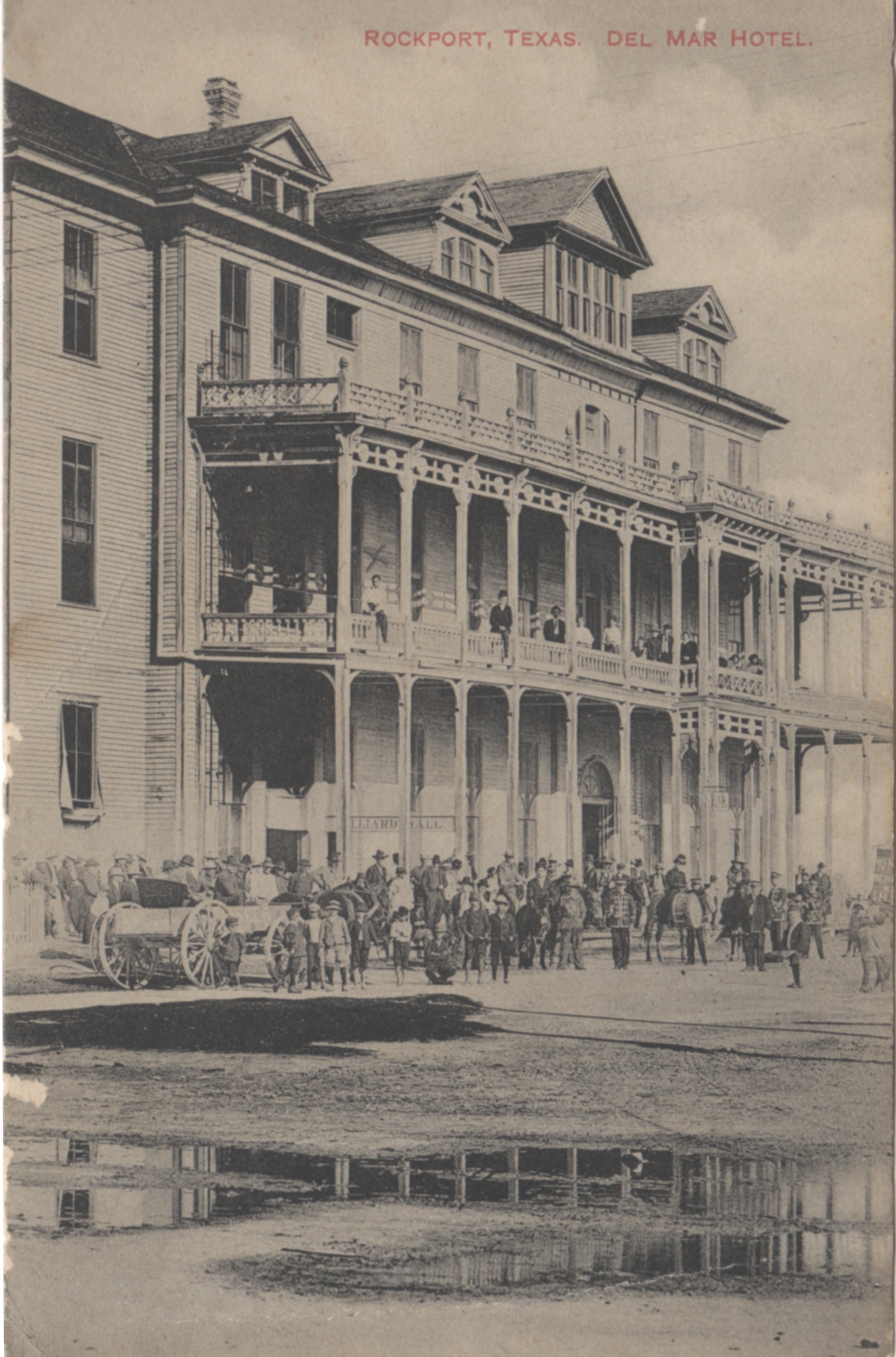 John Traylor built the Aransas Hotel in 1889. This hotel took up an entire city block in downtown Rockport. It had fifty rooms, and the dining hall could seat 200 people. This hotel changed its name to the Del Mar in the mid- 1890s. By 1906, it was abandoned. On March 2, 1919 it was totally destroyed by a fire of unknown origin.

The La Playa Hotel was built in 1912 on the rocky point, the limestone ledge at the end of Wharf Street. During the 1919 hurricane, eleven people were trapped in the hotel, but all survived. The building suffered major damage and was never rebuilt. 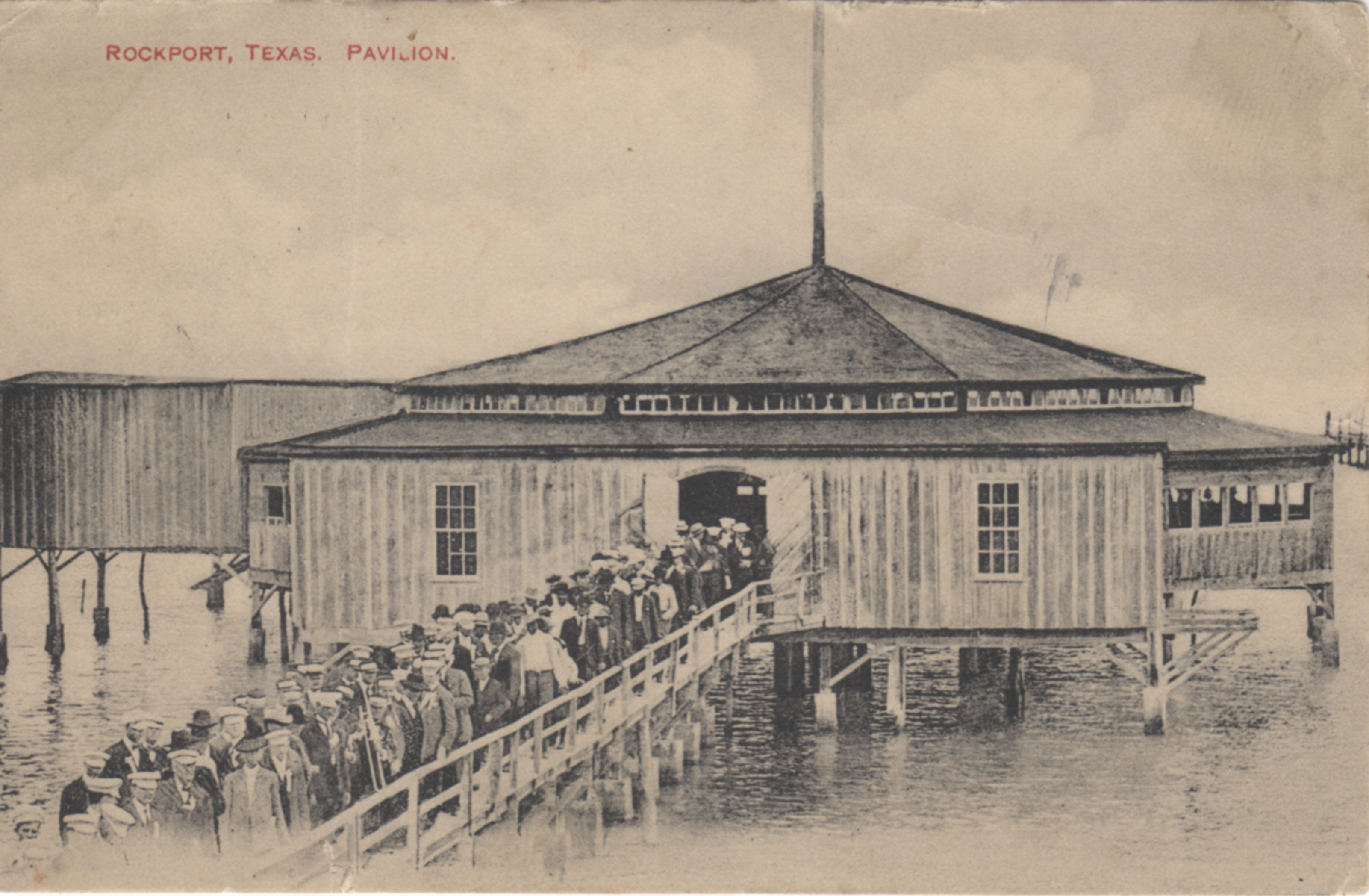 The Bailey Pavilion was located at the end of a wharf, in front of the Aransas Hotel. It was built in the mid-1890s. Traveling troupes would present plays and medicine shows on its stage. The first graduating class of Rockport High School held their commencement exercises here in 1907, for six students. The Pavilion was destroyed in the 1919 hurricane. 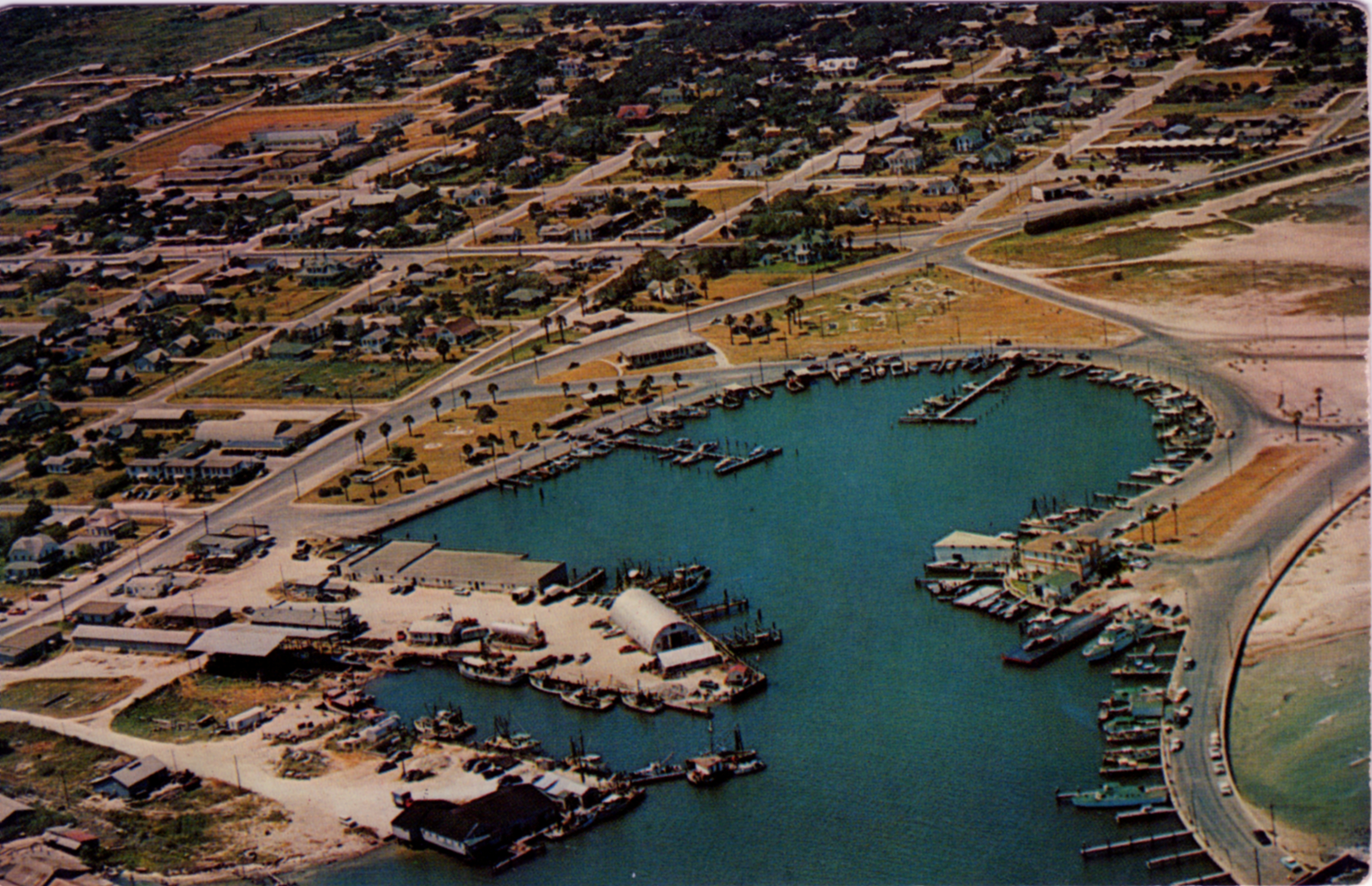 In 1940, Rockport’s boat basin, called “the fishbowl” by locals, was created. This picture from the mid -1950s shows the Woman’s Club building in the middle of the photo, which was moved to this site in 1948.

In 1947, the Rockport Marine Lab was built. It housed aquariums on the first floor, with offices on the second floor. The aquariums closed in 1987. The building is still standing, and has an historical marker.

The Del Mar Grill was a café’ on Austin Street that specialized in seafood. In 1957, the owners put this big blue crab on top of the building. The Grill closed in 1965 and the crab ended up in Veterans’ Memorial Park by the harbor. It finally deteriorated and was taken down in 1976. 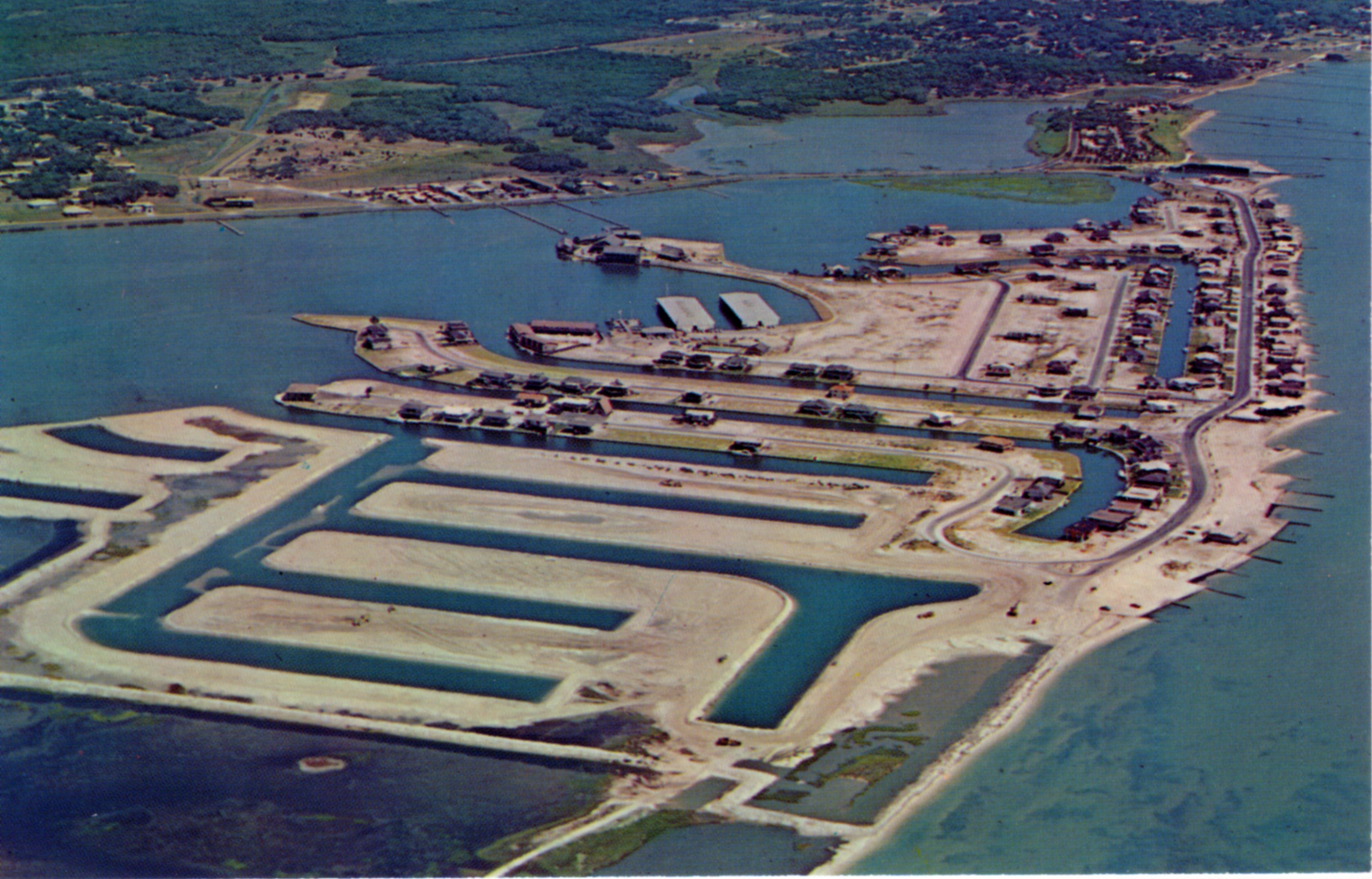 In 1962, Carl Krueger began dredging the canals for Key Allegro. This picture is from 1963.

Photos and captions courtesy of Kam and Scott Wagert

The Spanish first explored the area in 1519 with documentation of Aransas and Copano Bays by Captain Alonso Alvarez de Pineda.  The earliest known inhabitants, the Karankawa Indians, were acknowledged by explorer Cabeza de Vaca in 1528.  The French tried to settle here in the 1720’s, with overwhelming resistance from the Karankawa Indians.  The notorious pirate Jean Lafitte built a fort nearby in the early 1800’s.

After the war between Spain and Mexico, all of what is now Texas was claimed by Mexico. General Zachary Taylor’s army camped here in 1845 during the Mexican War.   A special park and arboretum, which includes the tree under which he camped, is named in his honor.

The Town of Rockport was founded in 1867 and chartered as a city by the Texas Legislature in 1870.  It became a thriving ranching, meat packing and shipping port.  In 1871, Aransas County was formed from a portion of Refugio County and Rockport, which was then chartered as a city, became the county seat.

In 1840, East Coast entrepreneur George W. Fulton married Harriet Smith, daughter of powerful Republic-era politician Henry Smith. After Harriet’s father died, Fulton turned Harriet’s land inheritance on Aransas Bay into a ranching and meatpacking empire as part of the Coleman-Fulton Pasture Company. During the 1870s, the Fultons made their fortune shipping cattle tallow and hides between Rockport and New Orleans. To symbolize their success, they built a mansion called “Oakhurst,” for the majestic windswept oaks that surrounded the property. The mansion was built over a period of three years, 1874–1877, and was the showplace of the town named for them.

Fulton was a man of many talents who achieved some success as an engineer and inventor as well as a ranching entrepreneur and promoter of the Texas Gulf Coast. Their bayside residence is a classic example of French Second Empire domestic architecture and is also a very personal and innovative dwelling. The historical significance of the house lies in its noteworthy architectural style, unique construction methods and advanced mechanical systems — which featured gas lighting, central heating and indoor plumbing with hot and cold running water — and includes the history of the Fulton family who built it and lived in it for 18 years.

Fulton Mansion passed through a succession of owners — a private residence, a restaurant, a backdrop for a trailer park and a recreation center — until its acquisition by Texas Parks and Wildlife Department in 1976. In 2008, the mansion became a Texas Historical Commission property.  Additional parking and an education building, which also houses offices, exhibition area, conference room and gift shop was completed in 2012.

Other historic homes in Rockport include the Hoopes-Smith and Leopold Bracht houses and the Moore, Wood, Al. Bracht and Fulton-Bruhl homes, which are all private residences.

Through Fulton’s effort, the railroad came to Rockport and it began to grow as a fishing, hunting, and beach resort destination. Four trains arrived daily in Rockport. Trolley cars transported visitors from the depot to hotels, ice cream parlors, an opera house, bathing pavilions, and beaches. Private hunting and fishing clubs catered to visitors by providing transportation to and from club properties.

News of Rockport’s incredible fishing, led to the founding of commercial seafood and fishing companies more than 100 years ago.  Much of the “gulf” shrimp and oysters served throughout the country today is harvested from the various bays surrounding Rockport.

Two major hurricanes in 1916 and 1919, destroyed much of downtown Rockport, as well as the industrial and shipping industries that were an integral part of the community for decades. Hurricane Harvey wreaked havoc in 2017 and the area continues to rebuild.

Those of us who make Rockport home are fully aware of the enviable qualities that define our way of life. We’re blessed with a verdant peninsula, natural beauty, moderate climate, spectacular wildlife, and a warm, inviting populace.

It’s the residents themselves that make Rockport stand out from its neighbors ... friendliness, involvement and commitment to maintaining the unique charm that has been associated with our commmunity.

With that in mind, the Sesquicentennial Committee would like to recognize those individuals and businesses whose contributions have brought Rockport to where it is today and what it will be in the future.

The "Spirit of Rockport" award was developed to recognize individuals and organizations which exemplify the unique spirit of Rockport. We’re looking for nominations for those who go above and beyond to make our community a better place. (click here to make a nomination)

"Oldest Living Resident," who can share stories of Rockport’s remarkable past (click here to make a nomination).

Did you have a baby in January 2020 ... or maybe even February 2020? If so, your newborn may be recognized as the FIRST CHILD to have been born during Rockport’s Sesquicentennial 150th Anniversary. (click here to make a nomination)